“Our lives begin to end the day we become silent about things that matter.”

TheSportingSnarf  is a website dedicated to the enjoyable, humorous, and nuanced aspects of the sporting and (to a lesser extent) pop-culture world.  We attempt to touch upon (in varying degrees of print/video length) engaging topics which are not discussed nearly enough. We’d love for you to give us your perspective, network, and participate regularly. But if you’d just like to join in on the mob-mentality and get all sanctimonious on a particular sports figure — head on over to ESPN.com. (Mickey Mouse welcomes you.) Or you can keep it real with us.

This girl cried wolf to the NAACP saying her and her boyfriend were racially profiled. Now, the information has come to light that they were banging in her car.

Watts’ obnoxious acting stood out to me in Weeds. This girl has some issues! In her TMZ audio, she won’t give the officer her ID for no reason. The little snarf puts her dad on speakerphone and tries to get him to talk to the police in the “brat play of the day.”

She claimed she was then arrested for kissing her white boyfriend, but the pictures showed her riding him.

“An eyewitness who saw Daniele and Brian as he worked in a nearby office tells TMZ … Brian was sitting in the passenger seat with his feet on the curb and Daniele was straddling him with her shirt pulled up — breasts exposed.  The eyewitness says she was grinding on top of him, rocking back and forth.

Someone from the office went down and asked Daniele and Brian to stop because everyone in the office could see them but they continued.

The eyewitnesses say Brian then began “horizontally bongoing her boobs back and forth.” He says she eventually reached into the center console, grabbed a tissue, wiped him down and then herself and tossed it on the grass.

Someone from the office called the cops and made an indecent exposure complaint. TMZ obtained police audio when the cops came out, and Daniele played the race and fame cards.” 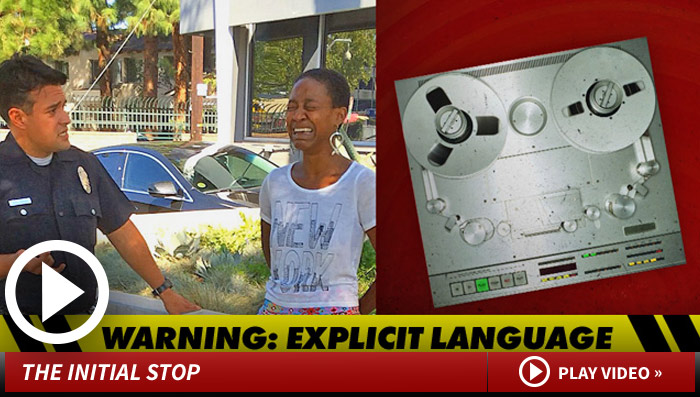 This is poignant because there really is an issue of police and racism, and this Hollywood power is belittling it. Shame, shame, shame on you, snarfette.

“It’s like crying wolf. And crying wolf. After a while it has no meaning,” said Dr. Earl Ofari Hutchinston to NBC News in Los Angeles. Hutchinson is the president and founder of the Urban Policy Roundtable.

In a joint statement released by Hutchinson and Najee Ali, who heads an activist group called Project Islamic Hope, the two posited that Watts’ claims undermine and have actually caused damage to the legitimacy of future incidences of racial profiling:

Civil rights leaders take the charge of racial profiling seriously, and [it] is not to be claimed frivolously. Anyone who uses that charge to cover wrongdoing will be denounced. This is the case with Watts, and this will send the message that there must be grounds for claims of racial profiling to be credible.

Use of race/fame card by haughty Django actress, #DanieleWatts, diminishes the credibility of legitimate claims of cop misconduct. #tcot

Disgusted by #DanieleWatts. We defended you. We believed your tears. Shameless. You owe every1 an apology especially those truly victimized.

via Activists to ‘Django’ Actress: You ‘Cried Wolf,’ Now Apologize to the Police.

“Civil rights leaders in Los Angeles are demanding that she apologize to the officers and community because when she made the allegations of racial profiling, which we take extremely seriously, we were in the forefront of speaking up for her,” Najee Ali, the president of Project Islamic Hope, told The News.

But Ali added he was disappointed Watts has declined to apologize — saying she doesn’t have the guts to admit she was wrong.

Coming to a Bookstores Near You

Six years ago today, I founded this site at halftime of the Super Bowl. I just hope it hasn’t been a waste of time. The only regular comment-er is my own dad. #2 my mom. My brother and my friends don’t even read these articles. Look, I’m not going to keep doing this just for […]